I recently purchased 5lbs of Olde Eynsford 1 1/2fg black powder for resupply and to test. I have shot my share of 2fg and 3fg, but wanted to give this bulkier powder a try. As it turns out, it is not much larger than 2fg and is clean and consistent. This powder flows into my drum set up very easily in Traditions St.Louis Hawken and ignition is instant with a CCI #11 Magnum percussion cap.

Today I was testing a variety of charges ranging from 70gr volume, to 90gr volume, using a water patched patch lube so I wouldn't have to swab between shots.

Olde Eynsford did not respond to this very well! In my rifle for example, I had a 7" 3 shot group at 100 yards. After I switched over to Frontier's Anti Rust & Patch Lube however, I was shooting under 1 1/2" groups at 100 yards. Your results may vary.

Traditions St.Louis Hawken .50cal at 100 yards today. 2 shots using 6 o clock hold. Next 2, I used 12 O clock hold. Only difference was my seating pressure and as you can see, heavy seating pressure did not affect the group size nor the impact. Shes right about 3" high at 100 yards. I do prefer to be dead on, but that's ok, I have plenty of time before I find out if I drew an elk tag or not.

Overall, I am very pleased with the accuracy and little fouling left behind. Its black powder folks... If cleaning every other shot bothers you, you have picked the wrong kind of weapon to be shooting!

Olde Eynsford is made by Goex as is a performance ( Hot Rod ) Powder made to complete with Swiss black powder. It also costs around $8 less per pound  than Swiss. 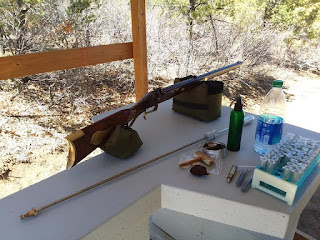 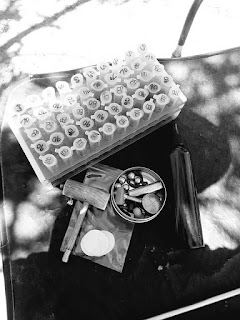 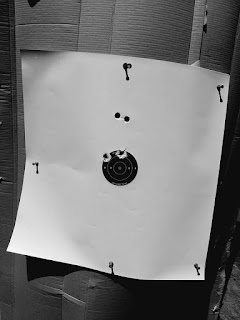 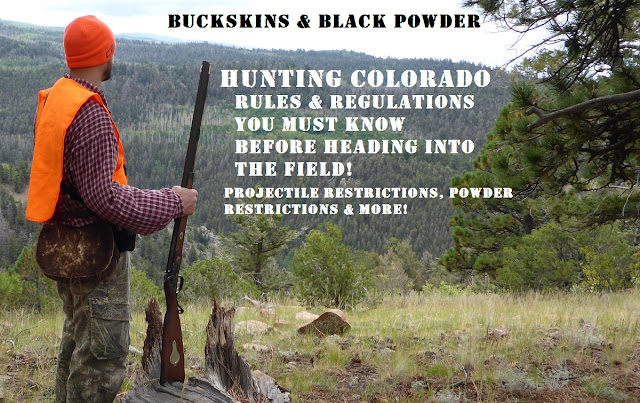 In this article, I hope to clear things up by offering an easier, straight forward explanation to the Rules & Regulations during Colorado's Muzzle Loading Season.

If you planned on using a scoped in-line muzzleloader spittin pellet powder and sabots, sadly for you, you are about to find out how restricted you will be when you draw a Colorado Muzzleloading big game tag!

Now just in case you are a scan reader, let's offer an actual picture of CPW's rules & Regulations pertaining to muzzleloading season. 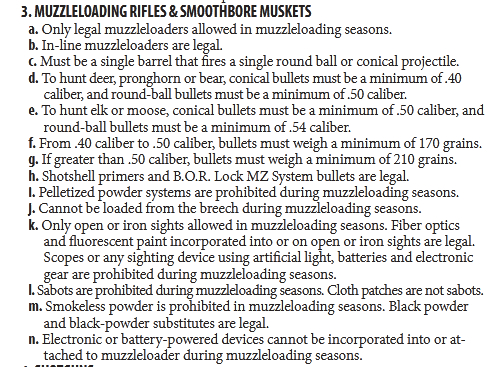 Now, We'll go and discuss some areas that are usually a head scratcher for some black powder hunters.

Deer, Bear & Antelope. Must be at least a .40cal shooting a minimum bullet weight of 170 grains. This means, you'll have to be shooting a conical bullet.

Sadly, CPW changed muzzleloading caliber restrictions. For elk and moose when using a patched round ball, we now have to use a .54 caliber as a minimum caliber.

No scopes!!
Now this is an area I have no problem with! It's muzzleloader season! And muzzleloader season is meant as a tradition, which is why Colorado places strict rules  & regulations during this hunt to limit your shooting distance.

After all, if you are using a scope, smokeless powder, sabots, you may as well be hunting during rifle season right?

***For those of you that DO in fact have a serious eye sight problem and require a scope, you can get a permit from CPW that allows you to mount a scope on your muzzleloader.***
Powders:
Goex, Olde Eynsford, Swiss, Pyrodex, Triple 7, Alliant Black MZ, Blackhorn209,  American Pioneer Powder. All of these powders are legal during Colorado's muzzleloader season. Smokeless powder is NOT!

The adobe fort quickly became the center of the Bent, St. Vrain Company's expanding trade empire, which included Fort Saint Vrain to the north and Fort Adobe to the south, along with company stores in New Mexico at Taos and Santa Fe. The primary trade was with the Southern Cheyenne and Arapaho Indians for buffalo robes.
From 1833 to 1849, the fort was a stopping point along the Santa Fe Trail. It was the only permanent settlement not under the jurisdiction and control of Native Americans or Mexicans.

The U.S. Army, explorers, and other travelers stopped at the fort to replenish supplies, such as water and food, and perform needed maintenance to their wagons. The American frontiersman Kit Carson was employed as a hunter by the Bent brothers in 1841, and regularly visited the Fort.[7] Likewise, the explorer John C. Frémont used the Fort as both a staging area and a replenishment junction, for his expeditions.[8] During the Mexican–American War in 1846, the fort became a staging area for Colonel Stephen Watts Kearny's "Army of the West".[9]
Ralph Emerson Twitchell makes the following statement.[10]\

Bent's Fort is described as having been a structure built of adobe bricks. It was 180 feet long and 135 feet wide. The walls were 15 feet in height and four feet thick and it was the strongest post at that time west of Ft. Leavenworth.

The construction of this fort was commenced in 1828 ... at a point on the Arkansas somewhere between the present cities of Pueblo and Canyon City, having been disadvantageously located. Four years were required in which to complete the structure. On the northwest and southeast corners were hexagonal bastions, in which were mounted a number of cannon. The walls of the fort served as walls of the rooms, all of which faced inwardly on a court or plaza. The walls were loopholed for musketry, and the entrance was through large wooden gates of very heavy timbers.

In 1849 when a great cholera epidemic struck the Cheyenne and other Plains Indians, William Bent abandoned Bent's Fort and moved his headquarters north to Fort Saint Vrain on the South Platte. When he returned south in 1852, he relocated his trading business to his log trading post at Big Timbers, near what is now Lamar, Colorado. Later, in the fall of 1853, Bent began building a stone fort on the bluff above Big Timbers, Bent's New Fort, where he conducted his trading business until 1860.[11]
When the fort was reconstructed in 1976, its authenticity was based on the use of archaeological excavations, paintings and original sketches, diaries and other existing historical data from the period. 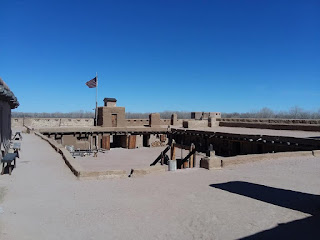 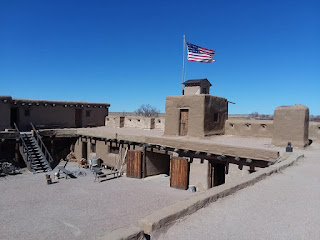 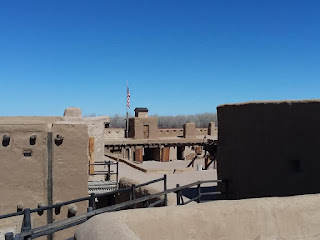 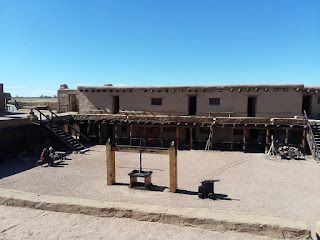 Powder Measures - Which Style Is Best? 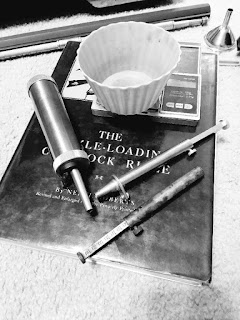 I was bored one night and decided to see what was the most accurate way of measuring powder charges right out of the box, without fiddling around.

All powder measures were heaped over with powder and then "cut" with the flat part of my finger. The measure with the funnel, automatically cuts the charge as you close it.

Next test, I tapped the measured to settle the powder and then topped them off and cut them level with my finger again. 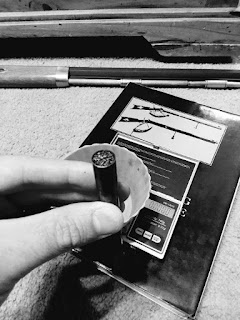 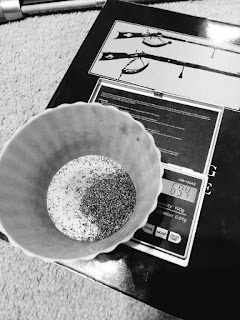 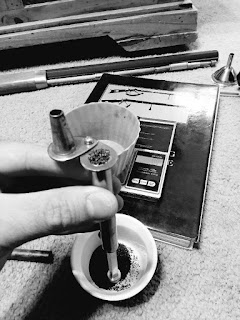 Note how much the powder settled just by closing the funnel. 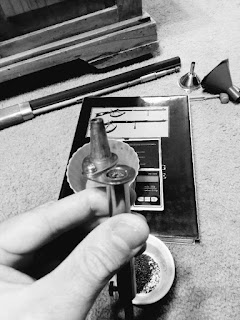 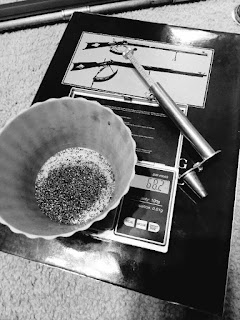 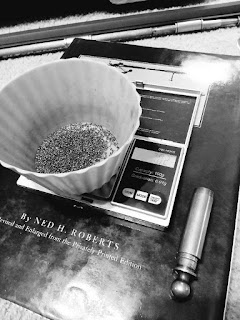 Now tapping on the measures to settle the powder, top it off then level it off. 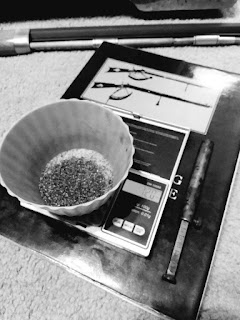 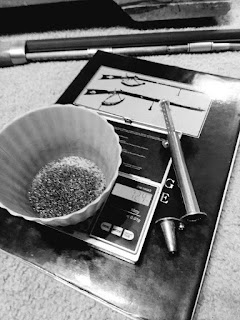 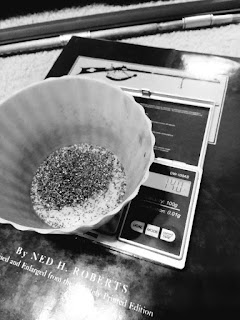 Overall, they are all well within acceptable measurements. The funnel powder measure however has a set back due to the funnel. With A chunkier powder like Alliant Black MZ, the powder gets choked off and when you think its empty, you pull it out of the bore and then it starts flowing again, spilling powder all over the place. Shooter must spend a little extra time shaking and tapping this powder measure to ensure that it is empty before pulling it out of the muzzle.

I personally like the open top, click style increment, powder measure the best, on the range and for hunting.
Posted by FG at 10:58 PM No comments: 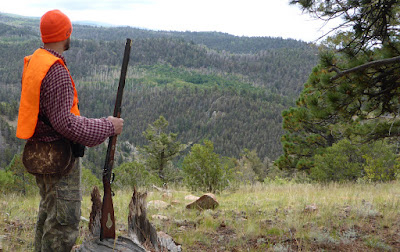 The words of a Modern Muzzleloader Hunter/Shooter, literally left me sick to my stomach. I've shot them, lots of them, throughout the years. But today, the inlines are being pushed well beyond their intended use. 400-500 yards on big game. Scopes that easily see the target and adjust to hit them from these distances. Smokeless powder. It's just a damn joke anymore!


Then we have the custom market for inlines. Inline muzzleloaders that can cost upwards of $4,000.
"These custom rifles are more accurate than most centerfire rifles in many cases.
I find it no more difficult than any other rifle. "
Where is the fun in that if its so easy?

Inline muzzleloaders are cheaters? No, the shooter just cheats themselves out of the TRUE tradition of muzzleloading by taking the easy way out by putting on a scope, using modern projectiles and powder.

Now you'll hear the modern crowd bringing up the traditional black powder groups that shoot open sights, 1000 yard groups at paper...... At paper... Not going out in the field hunting big game and taking them from 400-500+ yards. A stray bullet doesn't wound paper when it misses its mark.

Again, nothing against inlines. Just when you hear folks saying how accurate their custom inline is and how these custom rifles are more accurate than most centerfires are... That draws a perfect picture as to why some states limit to you open sights.

There's is absolutely NOTHING traditional about carrying a scoped inline muzzleloader into the field and blasting away at game from 400+ yards away.

If you are looking for an easy way to harvest game, stick with the centerfire during rifle season. Or better, keep that scoped inline out of muzzleloader season and hunt rifle season.
No challenge using scopes & high tech gear/gimmicks!
Posted by FG at 10:49 AM No comments:

Some fun targets to print out and shoot! 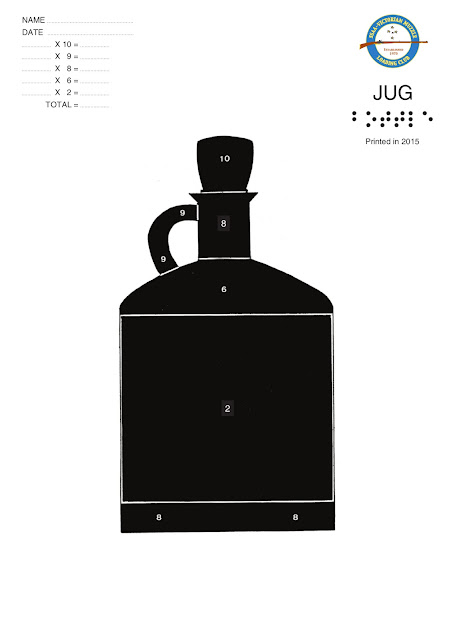 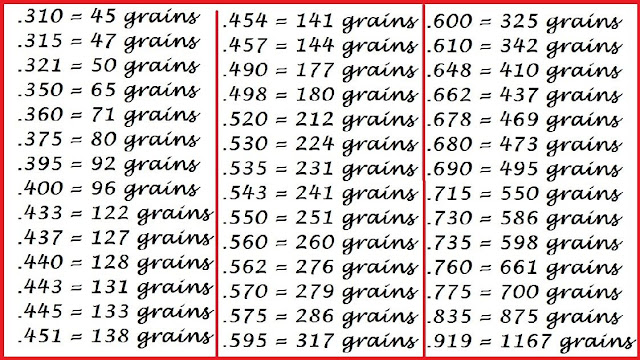 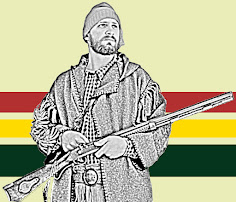 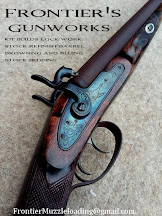